Solar Thermal Power Plant Working Principle Solar thermal power plants make use of the sun’s energy to heat water, which produces steam that turns the turbines and generates electricity. They also may be known as concentrated solar power (CSP) plants, as they use mirrors or lenses to concentrate sunlight onto receivers that heat water or other fluids like oil to create steam, which then runs through steam turbines and generates electricity. In some plants, the heat can be stored in molten salts, which can maintain temperatures up to 565 degrees Celsius even after the sun goes down. Here’s how solar thermal plants work in detail. 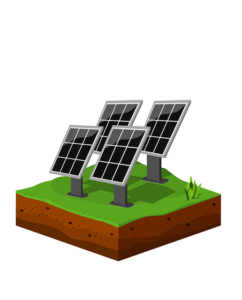 Solar Thermal Power Plants, more commonly Solar Thermal Plants (STP), are a type of solar electric system that uses mirrors to reflect and concentrate sunlight onto a fluid. The heated fluid is then used to produce steam which drives the turbines to generate electricity.
The three main components of an STP are the solar field, the heat transfer fluid, and the steam generator. The solar field is comprised of a series of heliostats that reflect light onto pipes containing the heat transfer fluid. As each pipe heats up, it produces steam until it reaches a predetermined temperature at which point it shuts off. When all pipes have reached their predetermined temperature, they all turn on simultaneously thereby maximizing production capacity by utilizing 100% of available solar irradiation.

A solar power plant is an energy-generating system that uses solar energy to generate heat. The heat is then used to create steam that turns a turbine and generates electricity. Solar thermal power plants can store the heat they generate, allowing them to produce electricity even when the sun isn’t shining. This stored heat can be used for up to six hours after sunset and before sunrise, or on cloudy days when the solar radiation intensity is low.

Greenhouse gases are emitted into the atmosphere when fossil fuels are burned and they cause the earth to heat up. This is known as the greenhouse effect. Greenhouses have a similar effect because they trap heat. And so do solar thermal power plants, which use mirrors to reflect sunlight onto a pipe of oil or water at high pressure to produce steam that turns turbines that generate electricity.

Solar cells convert sunlight into electric current by absorbing photons and converting their energy to electrons. This conversion process is called the photovoltaic effect, and it can be found in various materials such as silicon, gallium arsenide, or other chalcogenides. Solar cells are generally considered a form of renewable energy because they harness energy from the sun, which will never run out. Unlike fossil fuels that emit harmful gases into our atmosphere when burned, solar cells do not release any noxious byproducts.

Solar thermal plants work by using the sun’s energy to heat a fluid, usually oil or water. The fluid then heats a substance called the working fluid (such as liquid metal). The heated working fluid is used to boil water to create steam, which drives a turbine connected to an electrical generator. When the steam condenses, it returns to its liquid form and the whole process starts again.

Solar thermal concentrating systems have been in use since the 1860s, but they are still an important and effective way of generating electricity. In a solar concentrating system, mirrors reflect sunlight onto a small area containing liquid (or oil) that is heated to a high temperature. The heat then turns water into steam which can turn turbines to generate electricity. Solar thermal power plants require more land than photovoltaic cells due to their need for large fields of sun-tracking mirrors, but the technology is economically viable for energy production in some regions with abundant sunshine.
The first solar thermal power plants were built in the late 1800s by Charles Tellier and Charles Fritts.

A solar water heater is a type of solar thermal energy system that heats water using a solar-collector panel. The collector panel is typically mounted on the roof of the building, facing south or west to maximize sunlight exposure in colder seasons. This configuration allows the collectors to receive more direct sunlight on a clear day than if they were set up on the ground. Solar water heaters can be used as backup systems for homes, which helps to provide some level of heating during cloudy days and cold nights even when the sun isn’t shining.

A solar thermal power plant is an example of renewable energy. The solar panels collect sunlight and convert it to heat. This heat then heats a fluid, which runs through a pipe that transfers the heat to another place (such as the boiler). Once the fluid has been heated, it can be used to create electricity.

Solar energy has been used for centuries to heat water and cooks food. Modern solar stills use sunlight to drive the distillation process. Water is pumped into a chamber where it is heated by the sun. The hot water vaporizes and rises to the top of the chamber, where cool ambient air condenses it back into liquid water that is collected in a storage tank. Solar stills can be very effective at purifying water because they’re relatively easy to construct and operate, have no moving parts, and can be made from inexpensive materials like plastic or even clay.

Trending Tech News In the USA 2022

Cobot Programming Language to Power the Robots of the Future