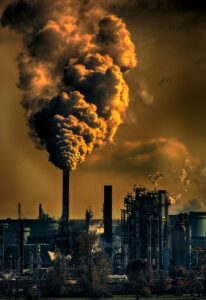 Reducing Carbon Emissions in Construction According to the US Green Building Council (USGBC), in 2016, the average construction project in the US produced 10,500 metric tons of greenhouse gases per year.

That’s equivalent to the emissions of 6,300 cars!

Many factors contribute to construction’s high carbon footprint, including transportation and fuel usage,

waste products created by subcontractors, and on-site power generation systems that burn fossil fuels such as coal and gas.

To reduce this burden on our environment and make construction more sustainable,

consider some or all of these tips on how to reduce carbon emissions in construction projects.

What is Carbon Emissions?

Carbon emissions are the gas that is released from the burning of fossil fuels.

The more people use fossil fuels, the more carbon emissions we produce.

Carbon dioxide is a major greenhouse gas and its levels have increased substantially since pre-industrial times, causing global warming and climate change.

Reducing carbon emission will reduce global warming. It has been estimated that half of all CO2 emitted by human activity originates from energy production and use,

while another quarter comes from deforestation and land use changes.

The demand for electricity generation also leads to coal being used for generating electricity which is one of the largest source of CO2 emission into atmosphere.

In addition, increasing the price on driving cars would incentivize people not drive as much thereby reducing transport related carbon emissions.

How do Construction Companies Contribute to Carbon Emissions?

With the use of heavy machinery and vehicles, the sector is responsible for up to 80% of all CO2 pollution. In addition,

It is estimated that between 60% – 70% of energy used by construction firms goes on heating and cooling buildings.

As a result, if not controlled effectively, the industry could be responsible for as much as 18% of global CO2 emissions by 2020.

Fortunately, there are many ways to reduce these adverse effects on the environment and improve sustainability efforts.

For instance, Construction firms can change their heaters from gas or oil-based systems to ones that run on renewable energy sources such as solar power or ground source heat pumps.

They also can replace old windows with newer more energy efficient ones.

The window replacement will decrease their dependency on electricity which is often generated by coal powered plants.

concrete and steel when constructing them. By implementing these environmentally friendly initiatives into their business model,

construction firms stand to reduce their carbon footprint while also saving money in both the short term and long term.

What are some Strategies to Reduce Carbon Emissions in Construction?

Climate change is causing the earth to get warmer and warmer every day, and this has a large effect on the environment. One of the most popular ways people are trying to reduce their carbon emissions is by turning to renewable energy sources such as solar power. This helps them save money on their energy bills while reducing their environmental impact. Another strategy that businesses can use to reduce their CO2 emissions is looking at any renovations they may be planning, such as painting or adding insulation. By making changes during these renovations, they can cut down on electricity usage for lighting and heating without having to change out or rewire anything inside of a building’s walls. In some cases, it might even be possible for them to reduce their total power consumption by 20%!

In order to reduce the carbon emissions in the construction industry, architects and engineers need to incorporate sustainable design into their work. Many people think of sustainability as an afterthought, but it should be taken into account when designing buildings. The US Green Building Council has a set of standards that encourages this kind of thinking. Architects and engineers can also create models on SketchUp, a 3D modeling software that uses less energy than traditional modeling tools like AutoCAD. This way they can test out different designs before building anything on site. For example, if you want to build an organic farm on your property but you don’t have enough space for buildings, you could use SketchUp to see how much room there is for crops before starting any major project.

When will the Tesla Model 2 be released?

Tesla Semi Truck Load Capacity: How Much Can it Carry?

A Lucid Car Showroom Experience in the United States