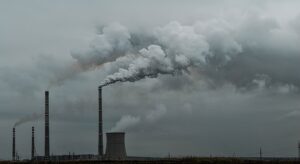 Carbon Dioxide Emissions From Fossil Fuels in 2022 Carbon dioxide emissions are expected to increase by 5.9% worldwide in 2022 compared to 2017, according to the Energy Information Administration’s latest International Energy Outlook report, which was released on May 22, 2018. The biggest contributing factor to this increase? A projected 16% rise in carbon dioxide emissions from fossil fuels as the world increases energy production and consumption over the next five years, causing the average global carbon dioxide emissions from fossil fuels to reach 33 metric tons per capita by 2022—the highest level ever recorded.

China is the largest producer of carbon dioxide emissions at 29.6% of the total global emission. In 2014, China emitted nearly one and a half times as much carbon dioxide as the United States. India is number two with 7.2% of global emissions, followed by Russia at 5%. The next four largest producers are Indonesia, Japan, Iran and Canada. Carbon dioxide emissions do not come solely from burning fossil fuels for electricity or transportation; they also result when natural processes release carbon that has been stored for millions of years in coal seams or oil reservoirs. Burning these sources to release their energy adds to greenhouse gas concentrations in the atmosphere, thus increasing global warming potential. Coal-fired power plants are responsible for more than 40% of CO2 emissions worldwide, according to the World Coal Association (WCA).

The carbon dioxide emissions from fossil fuels will be at 9.3 billion metric tons by 2022, which is a 1% increase over 2017 levels. Coal and natural gas will be the main sources of this CO2 emission, with coal emitting 2.1 billion metric tons and natural gas emitting 2.3 billion metric tons in 2018.
Emissions are expected to remain stable for the next five years due to the slowdown in economic growth projections for both China and India, coupled with the increased use of renewable energy sources such as wind power. Even though these changes are occurring, there is no foreseeable decrease in global carbon dioxide emissions until 2030.

Industry, transportation and residential are the largest sources of carbon dioxide emissions. In 2011, 39% of carbon dioxide emissions came from industry, 23% came from transportation and 40% came from the residential sector. The industrial sector has been steadily decreasing its use of coal for power generation and is now turning to natural gas and renewable energy sources such as wind power. Transportation has seen significant increases in the use of hybrid vehicles and biofuels such as ethanol. Residential usage has also seen a decrease due to more efficient building construction methods and appliances that use less electricity or run on renewable energy sources like solar or wind power.

What Can Be Done to Reduce Emissions?

There are many things we can do to reduce carbon dioxide emissions. Governments can work with the private sector to invest more in renewable energy sources, like solar and wind power. Households and individuals can also make small changes that add up to big results. For example, you could carpool or take public transportation instead of driving your own vehicle for every trip, or use less power during peak hours by turning off lights and appliances when they’re not being used. Cleaning our air will mean less smog and acid rain, too!

A Walk Through Virtual Reality in 2022