A Roadmap to Artificial Intelligence and Machine Learning

A Roadmap to Artificial Intelligence and Machine Learning

Artificial intelligence (AI) and machine learning (ML) are some of the hottest topics in business today, with predictions that AI will soon do everything from predicting stock market trends to helping doctors diagnose health problems based on biometric data. But if you’re not familiar with these technologies and aren’t sure where to start, it can feel like trying to run a marathon without knowing how long a mile is or which direction to run in the first place! If you want to get up to speed on AI and ML quickly, this roadmap should be your starting point.

AI is an incredibly broad field with many different subfields, but for this post, we’ll be focusing on Artificial Intelligence and Machine Learning. Artificial intelligence (AI) is often considered the study of computer systems capable of performing tasks that would otherwise require human intelligence. The AI field in its modern form was founded by Alan Turing in 1950. At a very high level, artificial intelligence can be thought of as the process of writing algorithms or programs capable of solving problems using techniques such as machine learning or neural networks.
Machine learning is a type of artificial intelligence that uses algorithms to allow computers to learn without being explicitly programmed. The system builds a mathematical model from examples that are given and make predictions based on those models. 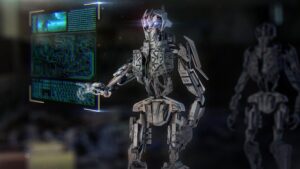 Many terms get thrown around when discussing artificial intelligence, machine learning, deep learning, neural networks, generative adversarial networks (GANs), natural language processing (NLP), computer vision, reinforcement learning (RL), and more. Knowing where to start with so many different concepts floating around in space can be difficult. In this post, we’ll dive into the fundamentals of artificial intelligence and machine learning by breaking down some of the most common terms.

The advantage of supervised learning is that it’s easier for machines to get started with this type of machine learning because there is already a lot of human effort involved in labeling the training examples.
The disadvantages are that it’s more time-consuming for humans because they have to carefully label each example and it’s more difficult for machines to learn from a wide range of training examples if all the labels are not consistent.

In a nutshell, reinforcement learning is based on the belief that agents will learn more quickly if they are allowed to interact with their environment. It is often called trial-and-error learning because the agent makes adjustments as it tries different actions and receives feedback on the results of those actions. This is in contrast with supervised learning, where you must tell the agent what action to take for any given input.

Artificial intelligence has been in the news a lot recently, with stories about the rise of AI taking over humans. One of the most famous examples is AlphaGo beating one of the world’s best players at the game Go in 2016. The methods that allow computers to play games like this are called artificial neural networks (ANNs).
They’re called artificial neural networks because they mimic how neurons interact with each other in our brains. ANNs work by passing information from layer to layer, with each successive layer able to process more complex information than before. For example, an image might go through three layers: one that detects edges, one that detects shapes, and finally one that detects objects within shapes.

In this section, we will explore an example of Image Recognition: Facial Recognition. Facial recognition allows computers to identify faces within a video feed, making it possible for companies like Facebook and Apple to recognize people automatically when they upload videos or photos. This makes tagging friends easier than ever before!

In conclusion, artificial intelligence and machine learning are both fascinating topics that will only continue to grow in the coming years. There are many different aspects of the field that we have not even begun to explore yet, but with a lot of research, time, and dedication, there is no limit to what we can learn.

Get Ahead of the Curve: Start Monitoring Your 5G Network Now

Verizon 5G Private Network: Where Is It Available?